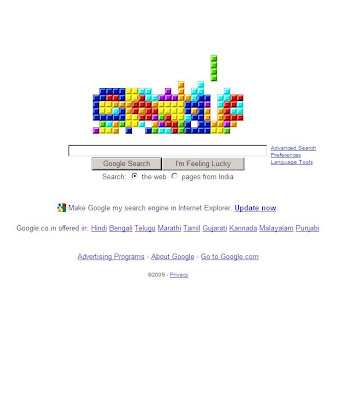 Given above is today's Google image. Yes, its dedicated to Tetris, the game that completes 25 years of existence today. I recently saw on TV, that Tetris is a game that has sold around 125 million copies since 1984 when it was released on June 6th. You can read more about Tetris in detail at Wikipedia, just click on the word Tetris in Italics and it will take you there.

I am not much of a gamer and to be honest I really fell in love with Tetris in 1998 I guess. I was in 9th grade that time and we used to live in a small town called Hissar in Haryana. I was really quite a recluse, I had two pet parakeets plus the pressure of studies and I was recovering from a life threatening illness so I didn't really engage much in physical activities those days. Nothing much has changed on that end anyhow, I still am quite lazy to participate much in activities.

My parents had bought us a small handheld videogame device. It had about 99 games, all variations of Tetris. We also had a video game set, for the TV but the handheld device held its own charm. I really used to enjoy playing the various games on it, and me and my brother actually used to take turns at the device.

Things were quite simple those days come to think of it, no cellphones, we had an outdated PC which we didn't even touch. I didn't even have an email account. I knew MS Office and had had an introduction to Windows but really they all seemed quite an alien thing that time. I had first seen a PC when I was in 1st standard and my dad had bought one which I mainly used for playing Bricks (I loved that game like anything) and or a Space game, I think it was called Space Commander. In 1998 however, I was totally not into computers. Mainly because the school I studied in offered a choice between Fine Arts or Computers and I had chosen Fine Arts. It was a hard choice because I did like Computers but then I had to make a choice as I wanted to study Fine Arts.

I formed my first email account in the year 2000 after the world survived Y2K :P .. what a hype that was! Anyways even in my dreams I hadn't thought I would be so involved with the Internet as I am today. Why today I even own a windows mobile.

I guess inspite of everything that we have today, cellphones, really magnificent games like Need For Speed, so many things on the internet.. what makes things like Tetris special is that, it is simple, it is easy and it became a part of good memories. I still love the game and this post's dedicated to its 25th anniversary.

How about you, do you have any Tetris memories? Or even any other memories of a game that you loved much?
Musings