Journey under the Midnight Sun - A Book Review 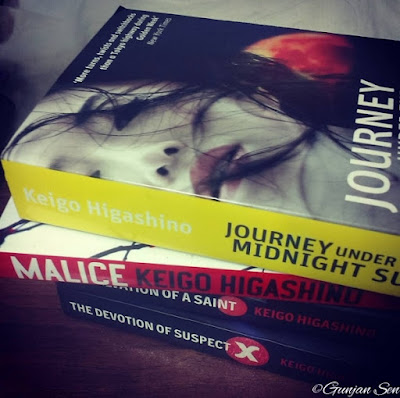 When a man is found murdered in an abandoned building in Osaka in 1973, unflappable detective Sasagaki is assigned to the case. He begins to piece together the connection of two young people who are inextricably linked to the crime; the dark, taciturn son of the victim and the unexpectedly captivating daughter of the main suspect. Over the next twenty years we follow their lives as Sasagaki pursues the case - which remains unsolved - to the point of obsession.

Journey under the Midnight Sun is Keigo Higashino's biggest bestseller and I am not surprised. The book traces the 20 year journey of Sasagaki and the kids - Ryo and Yukiho. The reader is introduced to several new characters in the course of reading and each time a new piece of the puzzle falls in place. I first read The Devotion of Suspect X, followed by Salvation of a Saint and Malice. Those who have read these novels would know that Higashino typically starts the novel with the murder and the murderer and then shows how the detective solves it. In Journey under the Midnight Sun, the treatment is quite different. The novel does start with the murder but who is the murderer, doesn't become clear till quite some time. Perhaps, this is one of Higashino's earlier works hence the difference in flow, this however does not make this novel any less enjoyable than his other works.

The book introduces us to several characters, each with a role to play. Yukiho is a pretty little girl whose poor mother is suspected of being involved in Ryo's father's murder. Yukiho is blessed with a degree of grace and elegance that is difficult to comprehend in a child her age, and especially more difficult to understand in a child who comes with her upbringing and surroundings. Ryo is a quite and gloomy boy with exceptional paper cutting skills. At some point, Yukiho is described as having thorns in her eyes and Ryo's eyes have a darkness and hollowness that startles most people that meet him. What is it that caused these kids to be engulfed in perpetual darkness? What causes them to lead a life devoid of the sun? These are questions that strike you from time to time and which finally get answered towards the end of the book.

Ryo and Yukiho are ofcourse not the only characters, there is Yuichi, an opportunist, who is ready to photograph the girls at Seika for a little money, Fumihiko, who is poor and finds luck shining on him when movie tickets come to his mother as a giveaway, Erico and Miyako who face the same strange fate, Tomihoko who works for Ryo and is indebted to him for life, Kazunari, the rich, intelligent and extremely good looking guy who somehow succeeds is desisting Yukiho's charm and Makoto, who loses love and finds it again. All these characters and their tales add new layers to the journey that this book sets the reader on.

I definitely recommend reading this book, you wouldn't be disappointed!