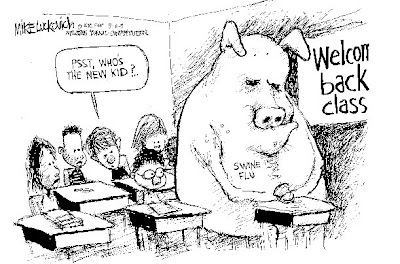 (Image from the Internet - TimeMagazine)


Swine Flu - If you read my other posts you will find all the information regarding symptoms and treatment that I could find on the disease. This post is what I think about Swine flu. Like I said before, I live in Pune, the epicentre of Swine flu. Pune saw the first casualty of Swine flu - Reeda Sheikh, a schoolgirl. Pune has the most number of people affected by Swine flu. Pune has seen the maximum deaths due to Swine flu. Pune also has the survivors, one teenage schoolboy even got cured and celebrated his 13th birthday post recovery.

In all the past days, the only thought that ran over and over again in my head is - how did we get here?

Earthquakes, floods, tsunamis, droughts, terror attacks, as with these; Swine flu has reinforced the need for India to have a disaster management system. The Black Swan theory tells us that the unexpected always throws us out of gear. So, ya, we can't control these circumstances and some chaos will result from such events but a disaster management system can definitely help in minimizing the effects of such events.

We have the population of a billion, the country is poor, there are many social ills and blah blah blah but really why is life not valued in this country? 17 people have died so far due to the disease. Is this what one expects from an influenza strain in this century? Spanish Influenza killed people in hordes back in 1918, its 2009 - why are people still dying?

Yes, its not right to blame, its a new disease, there is no vaccine to prevent it but we do have medicines that can cure it. So why is it that the death toll is rising daily? Lack of awareness, or callousness on part of the health care providers.

All the prevails is chaos. Some homeopathic stores are claiming that homeopathy has the ideal medicine that can prevent you from contracting swine flu. Have they tested it out? The disease is new, how can they know for sure? Ayurveda and Homeopathy are strong disciplines in their own right, one can definitely expect to boost one's immunity by using a prescribed Ayurvedic or Homeopathic regimen. But is this claim valid, don't the Homeopathic store owners have some moral responsibility? Or they just feel that minting money is the best policy to adopt even in such times of distress.
Masks are a preventive means for the disease, so the supply of masks is less. The ones that are available are being sold at higher prices. Is this right?

This time will pass, we will have stories to remember, some good, some bad but when will India learn a lesson? Our dear politicians concentrate their energies on every damn thing out there except the important ones. I am digressing from Swine flu but the bigger question is, India Shining, India Growing - really? Let me see - day after tomorrow is our Independence day. What is India's progress - Caste System - blooming thanks to political parties including the Congress that for their own good believe in expanding the reservations at the time of every election, Poverty - blooming as always, Development - environment unfriendly buildings, deforestation, global warming, potholed roads, water problems, power cuts..u get the drift, National Security - terrorists keep attacking us whenever they feel like, public money is wasted on feeding and satisfying every whim and fancy of terrorists like Kasab - maybe they are waiting for another IC -814, Health - after swine flu well what can I say?

Swine flu is disturbing but I hope every Indian will learn a lesson from this and take some steps. You know the politicians are not doing anything, its time we did something ourselves.

It is TIME to make a change.
Health