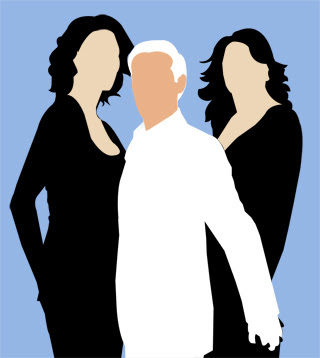 
I had seen a movie a long while ago - An American Haunting. Its a horror flick, not gruesome just slightly disturbing, its only in the climax that the truth is revealed which was well really disturbing! The movie deals with ghosts and incest. The way I see it, a family learns to deal with the pain of a father raping his daughter by naming it as a consequence of wicked spirits and witchcraft.

Witchcraft and magic of the bad kind has often been used to cover up Man's mistakes. If a woman commits adultery, she is given names, her persona is then out on the table for anyone and everyone to comment upon. And not only adultery, many independent thinking women have been said to burnt to death in the name of Salem Witchtrials, only and only because they were more independent in their thoughts and beliefs.

If a man commits adultery, he is let scott-free in many ways. One of the oldest excuses is that the other woman was a witch, she lured him and trapped him and he couldn't escape her seductive ways. The entire family then rejoices the return of the man, they celebrate that he could get out of the trap, break the magic etc., and everything is fine again.

Is everything really fine? I have often wondered the plight of the man's wife. She knows it wasn't witchcraft, and yet to embrace the relation again she goes with this pretense but how much pain she must be enduring. To believe this make belief, to forgive in the name of witchcraft, it must be hard and the pain must be excruciating.
Social Evils