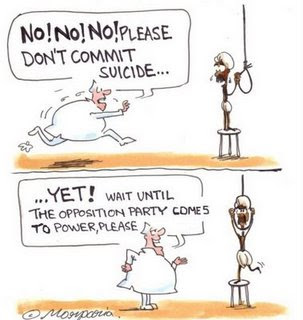 (Image from the Internet)
There is a theory in Psychology. A famous test that talks of Psychotic or 'P' factor. The findings of the test are that 'P' factor is higher in politicians and criminals. Infact they fall in the same range. The only difference being in the way they project themselves to society, one shows he's all goody-good and for the people and the other openly manifests his malign feelings towards others by causing them harm. Ultimately both cause harm.

The worst part is we know the criminals, we fear them, we fight against them, we protect ourselves from them. The politician, we ourselves grant him that position, we ourselves lower our defenses, we only make ourselves vulnerable.

Every year passes, we wait for the party in power to take action. We wait for them to deliver those promises made at the time of elections. Nothing happens, or maybe the scenario turns around in such a manner that the deliveries fall below the need of the hour. We then wait for the next elections. We trust, we believe, we go out to vote. We fall for the promise again and we get disappointed again.

The most ironic part is the lure of the dynasties in India. We live in a democracy, the largest in the world. Yet, what do we do? We, the majority of us vote and trust on the basis of lineage. He or she is so and so's son. Has to be good, will deliver. They come along everytime, but do they actually perform? And what is the purpose of democracy? Are we really in a democracy or a public in awe of dictatorship..what's with the Love for the Dynasties?

The debate between the young and the old, how does that matter? When have the old delivered, and when have the young? Its not age, its not time, its just 'P'.

Yet hope remains, I guess hope is one of the most important and strongest forces of life.
Politics